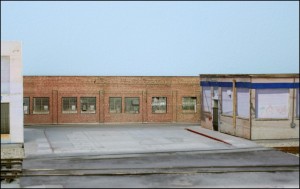 Background flats can be challenging from the standpoint that they are frequently needed as part of the layout to backdrop transition but are also so easy to botch.  If not handled carefully they can be real scene busters and literally scream that you are looking at a model railroad.  A few slights of hand make them easier to pull off.  First, keep them low.  Second, hide the side edges.  Third, look for ways to add any depth you can.

The scene above is at the point South Everett Avenue meets the backdrop.  I introduced some perspective by printing it less than scale height, two inches in this case.  Both sides of the flat are screened by the foreground structures.

I did a few things to add some depth.  Rather than glue it directly to the backdrop I adhered it to a 1/16″ piece of plexiglass.  I also glued on some partially opened windows.  Finally, for additional forced perspective I put a 1/4″ sidewalk in front.

Here’s the base image for those that want to play around with it.