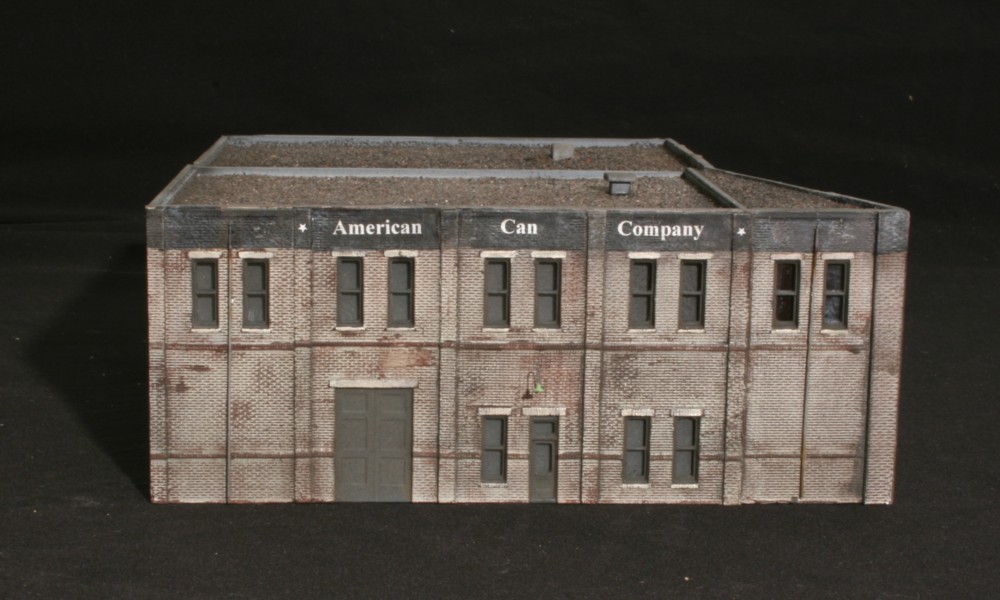 The brick shipping structure associated with American Can was just too uniform in color.  It needed “something”.  First up I painted the window sills concrete which makes a much bigger difference than you’d expect.

Second, I decided to add a logo band across the top.  Making your own decals can be a dicey process at best although this time it worked out fine.  I did the art in MS word.  I started with a piece of Microscale white trim film and coated it with Dullcote to give the surface some bite for the ink to dig into.  When that dried I taped it to a piece of typing paper and printed it out on my HP inkjet printer.  The ink was noticeably wet coming out of the printer so I let it dry for four or five hours.  I then loaded some straight Microscale Liquid Decal film in the airbrush cup and gave the sheet several fairly thick passes.  When that dried I doubled down and added two more coats of Dullcote.

All of this coating of the film did the trick as the decals then worked fine without any degradation.  I applied the band as per the instructions using Micro Set.  After an hour or so I used a soft cloth to gently seat the decal into the brickwork.  After everything dried, I coated it with Dullcote.  To tone down the white lettering I gave it a wash with my India Ink and alcohol mix.  The black portion of the band was still a bit dark so I very, very lightly dry brushed some light gray across it to highlight the brickwork.