Pulling the Brooklyn Plan Together

Despite its relatively small size, planning the Brooklyn layout has taken a fair amount of time.  I’ve been balancing the often competing goals of capturing the sense of the area while at the same time keeping the overall scope from getting out of control.  Urban modeling takes a lot of time to pull together because you can’t just lay down some static grass, plop down a few trees and be done with it.  Structures need to be built.  Streets, lots, and sidewalks need to be laid down, all more time consuming than natural features.  “Time”, in all of its iterations,  has become a big part of planning my personal designs.  How long do I want it to take to get at least up and running?  How long do I want a session to last?  Do I really want to bite this much off?  For the Brooklyn project my key planning objectives were:

I plan a layout for myself using a combination of site visits, studying photos (aerial and street level), studying maps,  reading whatever literature others have put together in print and online, and full scale mock ups.  Particularly for small layouts, laying things out 1:1 becomes especially helpful in terms of scene composition and visualizing how things will look once the actual model gets built.

The plan above measures out to  5’6″ by 6′ and is a “free standing island”  format located in the same spare bedroom as the LAJ railroad.  For those familiar with the area, it draws its primary inspiration from the Bush Terminal but I “stole” the yard and float configuration from the Fulton Terminal, especially the yard located on a pier.  Street track will be modified Kato Unitram.  I’ll probably slap down some sectional track in the rest of areas to get me running quickly and will decide on permanent track later.

Structures will be primarily Walthers and DPM as they are close matches for what is typical for the area.  Realism will be driven by scene composition and carefully thought out color selection of the structures. 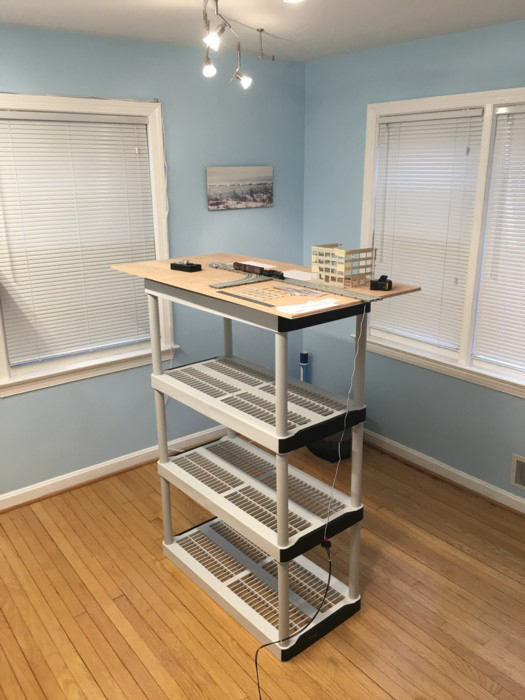 For small layouts, I really heavily on full size mock ups to make key planning decisions. Here I’m checking layout height and shelf width. To compensate for the smaller size of N scale, the layout will be set at a relatively high 57″. After laying out the street, structure, and pier widths, a shelf width of 20″ was established. The LAJ layout is in the same room just out of sight to the left.

In looking at the mock up photo above, I can’t emphasize enough how much thought goes into carefully considering the scope.  With the mock up in place, I spend a lot of time studying it, coffee cup in hand, thinking through the construction steps, and asking myself, “Do I really want to bite this much off”.  I’m continually looking for ways to reduce scope, not increase it.  For example, most actual car floats are three tracks wide and longer than the Sylvan model.  I decided to go with the smaller Sylvan model because it was one of many ways to trim back the scope.

One of the advantages of selecting the Bush Terminal as a theme is that most of the signature features have escaped gentrification and are still there.

With the plan complete, the next step will be the bench work.  I’ll keep everybody posted!