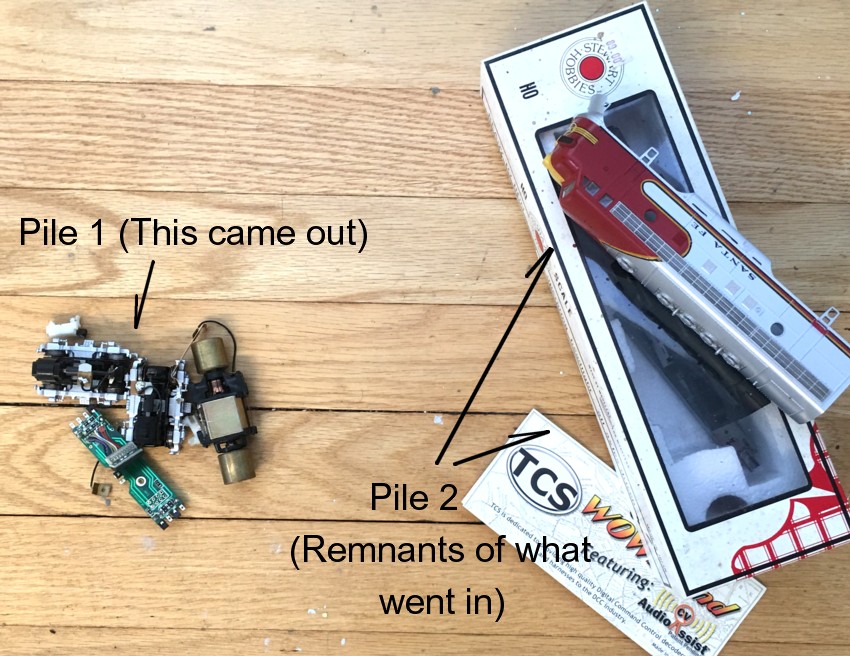 Sort of like a heart transplant…only harder. Pile 1 came out of the Athearn unit, Pile 2 is the packaging of the parts that went back in.

Well, that was a process (or, in terms my less refined readers can understand…a major pain in the ass) but in the end entirely worth it.  The CF-7 now houses an upgraded Kato drive and TCS Wow decoder.  I’m happy.  Essentially the major surgery involved two steps, mechanical and control, with the control side of things ending up being the easier of the two.

I’d been curious about the TCS Wow decoders and decided to take a flyer on them for this project.  To say I’m impressed is an understatement. Wow is right!  The sound is richer and more vibrant than any decoder I’ve used previously.  The keep alive is great but a little unnerving until you get used to it.  If you take your loco. off the layout and set it on your desk it keeps running until the capacitors discharge!  The major surprise, however, was the motor control.  The Athearn RTR/Blue boxes have a low cost/mediocre drive train.  Before getting into the major surgery of the drive train replacement I tested the Wow system by clipping it into  the existing Athearn drive train (TCS provides an excellent online photo tutorial BTW.  Perfectly engineered fit.  Super simple ten-minute install).  I couldn’t believe how much the back emf smoothed things out.  I seriously considered forgoing the drive train replacement.  You may want to as well.  However, I’d already purchased a donor locomotive with the Kato drive so couldn’t leave well enough alone.  Half way through I was wishing I had!

The mechanical end (replacing the drive with that from Kato) proved to be more daunting.  As a starting point, I used Richard New’s excellent tutorial on RMweb.  That would only take me so far because the dimensions of the Wow decoder, with the attendant capacitors and motherboard, were much larger than which was used in Richard’s example.  I also had a speaker taking up additional room.  On top of that, the Wow decoder is precisely engineered for the configuration of an Athearn motor.  The Kato unit is entirely different.   A fair bit of surgery and wandering off the beaten path ensued.  I swear to God, Norm at TCS tech support is the most patient human to walk the face of the earth.  He  talked me through the necessary changes and revisions in soldering points, all of which worked perfectly.  There are so many wires to contend with between truck pick ups, motor pick ups, speaker wires, and headlights.  Wire management becomes an issue.  I also had to do a lot of careful shifting around to position the relatively large decoder so it wouldn’t interfere with the speaker directly above it.  In the end, I made small “zip” ties out of electrical tape and shims from styrene to keep things organized and positioned.

The second problem that arose was keeping the drive train aligned.  Richard was correct in saying the Kato trucks and motor fall right into place in the Athearn frame.  However, the motor needs to shimmed up .060″ with a styrene pad for the shaft to align with the trucks.  The motor cradle is also made of soft plastic.  Add the two together and it took a lot of work to align the shaft vertically, horizontally, and secure them given the soft plastic foundations of the cradles and shim.  The spacer renders the motor mounting screws too short so I had to go The Home Depot and pick up some number 4 half inch long replacements.  After two full days, over two weekends, it all sorted out in the end.  I now have an ultra smooth runner with excellent truck pick up, great sound, keep alive, and a decoder with the capacity for immense tuning capabilities and features.

Finally, a call out to my blog followers.  The next project is intalling a working Santa Fe style roof beacon/gyralight.  If any of you have experience with doing this effectively I’d love to hear from you.