In the past few years, when planning a layout for myself, I’ve taken a more time oriented approach.  How long do I want it to take me to reach the fifty or sixty per cent completion point?  How long do I want an op. session to last?  Will I be operating primarily solo? What work will the imaginary crew be doing during that session?  With the answers to those questions in hand, I feel I’m more likely to come up with a layout size and track density that fits my lifestyle.

Keep in mind that I still have my “main” layout, the Downtown Spur in the basement.  I still maintain it and still operate it.  The only thing that has changed is that the final push to finish the remaining twenty per cent or so of scenery has been put on the back burner.

With the LAJ layout, I wanted it to be more than half done at the eighteen-month mark.  Check.  I’ve always been intrigued by corn syrup facilities and their long strings of nondescript, flat black cars, outwardly looking the same, but actually quite different by virtue of the different grade loads they contain.  I guess I’m a simpleton but I don’t really get bored running through a similar operational scenario repeatedly.  As such I don’t need a broach variety of industries.  This isn’t for everybody and if that approach would bore the hell out of you, as it likely might, you need to plan accordingly with your industry selection.  In the real world, a switch job looks similar month in and month out.

The last thing I needed to check was the length of  operating session my design would support. My attention span for intense switching operations is about a half hour.  My original thought was to double track the Sweetener Products facility.  That would have put the capacity at about ten cars.  Add in ten more cars for inbound loads and the rolling stock cost, and the time to detail it, starts mounting.  My gut told me that so much capacity would far exceed my thirty-minute goal so I ultimately decided on just a single track.  The plant’s capacity is five cars  serving three grades of syrup.  Right now I only have four cars detailed and on the layout.  How long of a session would working just those four cars produce?  Time to put it to the test.

The diagram above shows the starting arrangement.  The switcher approaches with three cars containing loads of 55, 200, and 300 grade syrup.  Those cars must be spotted at the corresponding unloading hoses at the plant. Complicating matters is the fact that the spot for the 200 grade syrup is occupied by a car still being unloaded.  The incoming load of 200 grade will need to be spotted outside the gate for later placement.

So how long did my test op. session take?  About twenty minutes, just a little shy of my half hour goal.  Not bad at all given how few cars I had to work with. Getting the tank car roster up to seven or eight cars should easily put me where I want to be. 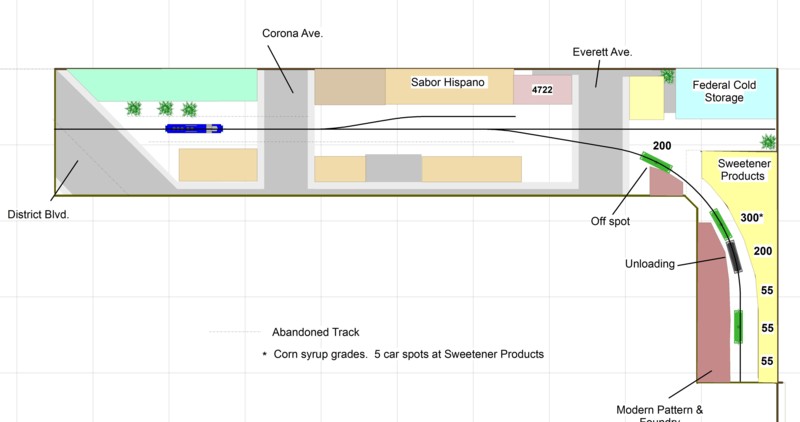