Using Likely Op. Session Length To Determine The Best Size for Your Layout

How much  layout do you need to do accomplish what’s important to you? I mean, realistically, how much model railroad do you REALLY need to be satisfied?  Most newcomers, and many veterans, grossly over estimate their requirements and by doing so create a lot of unnecessary expense and angst for themselves.  Certainly there are many factors that could go into determining how large of a layout you design for yourself.  My hunch however is that, as a hobby, we are so petrified that our layout will be too small that we pursue the subject with blinders on.   With no basis in reality, many begin the design process from the negative viewpoint that they don’t have enough space. Every decision is based on the shoehorn strategy.  How do I shoehorn in “one more industry, one more turnout”.  This panic driven approach to layout design often results in model railroads that are too large for the individual’s lifestyle and frequently never get built.   In those cases where the layout does get built the owner may find they designed in far, far more operational capacity than they could ever hope to utilize.  The visual result is a model railroad packed with overly compressed, unrealistic scenes.

Unlike the hobby as a whole, the majority of the followers of this website are interested in operations.  Many are just starting, or are about to start, construction of their first layout.   A fair number of folks have a generous amount of space available.  (They may not realize it yet but they do.)

So, if your primary interest is operations and space is adequate, how much capacity do you design in?   How many industries or car spots do you need to get the satisfaction you want from the layout?   If you had a thousand square foot basement would you design a layout to use all of it?  Of course not, you’d never be able to utilize that much capacity.

To start we need to know a few things:  How often will we operate alone, how often will we operate with guests, and finally, how long do we want an operating session to last.  I’m going to divide op. sessions into two types.  The first is the full blown session with guests.  Outside feedback continues to confirm that most guests start getting burned out at the three hour mark.  Three hours (or a bit less) is generally the ideal session length when guests are over.   However, this is the upper end of session length.  The frequency of these sessions with guests should also be taken into account.   Despite the best of intentions, for most people these full blown/guest operator sessions don’t happen nearly as often as they initially thought, perhaps three or four times a year max.

By far the most common op. session scenario is the layout owner running by himself, or it least it should be.  Don’t fall into the trap of thinking that a session has to be the full three hour deal with guests vs. nothing at all.   For planning purposes assume that when you’re running by yourself that you go for twenty minutes to an hour at most.  Let’s say you do this once or twice a week (ideally more).

At this point we know the lay of the land.   If  the maximum load on our layout is when we have guest operators over, we only need enough capacity for, at most, a three hour session.

Now we get to the design part.  The key question is this, how much layout does it take to create a three operating hour session?  How many industries, or to be more accurate, how many car spots do we need?   This is where people get into trouble.  It takes far less layout than you would think because the individual operational tasks take far longer than you’d think.

It takes about eight industries.   Eight industries will give you a three hour session.  Certainly there will be some variation in this number depending on the type of industry but this is a good starting point.  It certainly isn’t fifteen or twenty (or fifty).

If you have the space, it doesn’t hurt to put in a few extra to allow for some variety from session to session.  If you had a dozen industries that would give you enough cushion so each session wouldn’t be identical.   I don’t view this as being critical though because in the real world there IS a fair amount of repetition from week to week.  The larger, more active customers, are often switched every session.  Remember also that the full blown, three hour session is the exception not the rule.

Of those eight industries I’d shoot for:

This is just a guide though.  A basic two track corn syrup facility could take two or three hours by itself to be switched (which by the way is the design solution if you don’t room for eight industries).

If your design starts running to more than a dozen industries, you may be designing in and building in more capacity than you can utilize.

There may be other reasons beyond operational variety for having a larger layout but, you have to start asking yourself some very pointed questions as to what you are accomplishing  with the extra capacity and square footage. 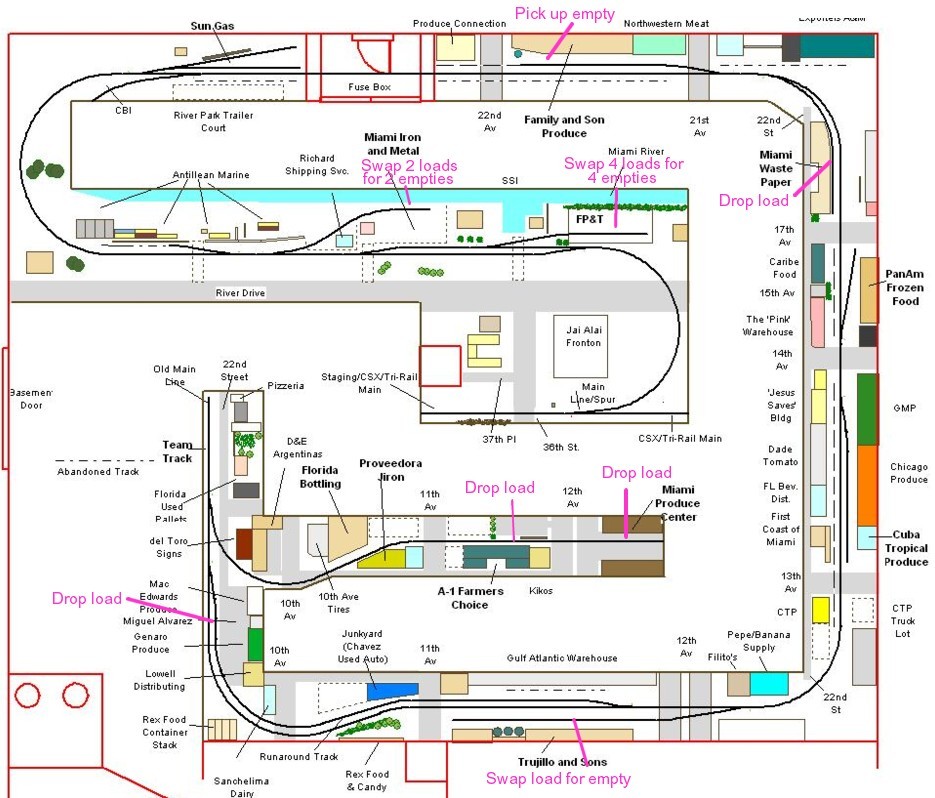 The diagram above shows the tasks from my last op. session.  I had a guest over and it took about three hours.   There were no tricks or complexities, the guest made no operational errors, and we worked at a realistic but relaxed pace.  The work at the two scrap yards was about as simple as it gets, swapping loads for empties.  Even so the first 55 minutes of the session were spent here.  It took about 20 minutes to swap out a load for an empty at Trujillo and about 25 minutes working the two industries on the switchback (which required particularly slow speed running and the use of fusee’s for the grade crossings).  The rest of the time was spent on the remaining industries, running down the main, brake tests, and pausing to review the paperwork.  Note that there were many industries that were NOT worked.  The two scrap yards, Trujillo Foods, and Family & Son would be switched every session.