Ergonomics, or the human comfort factor, plays a much greater roll on our layout than we realize.  It impacts how often we run it, how enjoyable the experience is when we do and, ultimately, whether we keep using the railroad at all.  The hidden trap is that ergonomics can be so subtle in some cases that we aren’t aware of what is sapping our enjoyment.  Such is the issue with rolling stock storage.

The only rolling stock that should be on a layout are those pieces that have a realistic reason for being there.  The problem is that most of us have more pieces than  have a justifiable reason to be on the railroad.  Some have WAY more but that’s a story for another day.    Things get thorny without us even knowing it.  Absent a good storage system, those excess cars ultimately end up where it’s easiest to put them……on the layout.  They gradually accumulate until things really become mucked up.  This overcrowding detracts from the experience without us even being aware of it.  Let’s see how we can address the problem.  Rolling stock can be broken into three categories:  pieces that need to be on the layout, those that will likely be cycled onto the layout in the near future, and finally those items that for a number of reasons won’t see use in the near future.  Those that won’t see use in the near future should be removed from the railroad, packed in their boxes and either put on a shelf or disposed of.  Easy enough.

It’s the second group that creates problems.  We have a large pool of cars waiting to get in the game, the sports analogy being pitchers in the bullpen. These are cars that won’t be in the current operating session but likely will be mixed into the flow shortly, replacing cars currently in service.  We have a problem.  We don’t want them on the layout now.  It’s human nature that if we don’t put them in a place that is super convenient to access, they won’t get used (which is why we put them on the layout when we shouldn’t have).  If we put these ‘bullpen’ cars in boxes, subconsciously we dread rummaging through the pile of boxes, reading box labels, opening the container, dragging the car out and then doing the same for the car being removed from the layout.

What we need to encourage us to keep the layout surface clean of unneeded cars is a very simple, easy to interact with, method of cycling cars on and off the layout.  The system needs to be close to eye level, not involve opening and closing things, and have an open top.  It needs to be a system that I call ‘grab-n’-go’, a system so easy we can comfortably and seamlessly handle car cycling.   The solution is any type of open top shelving system that keeps the cars fairly close to eye level. 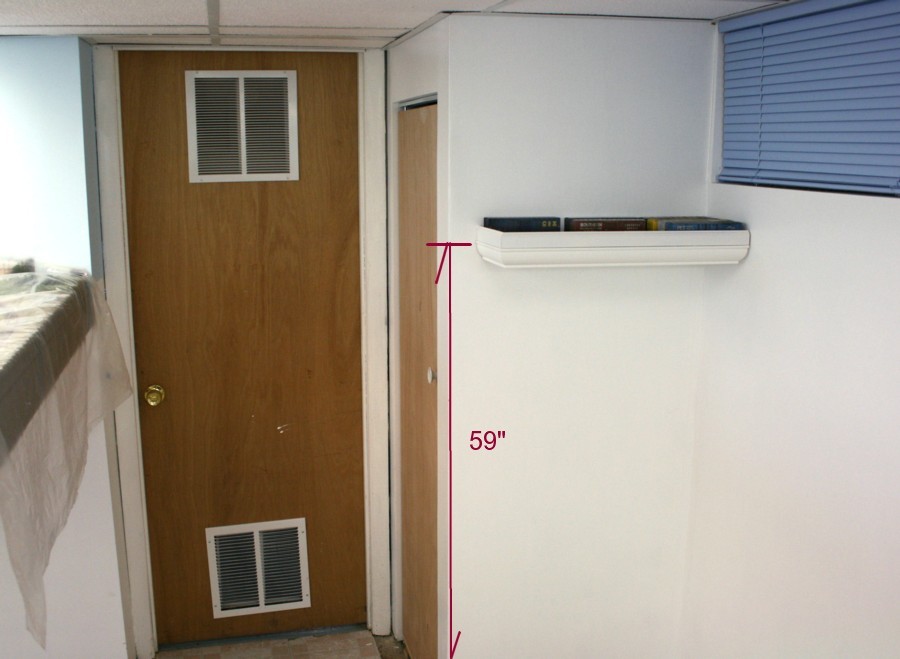 In thinking through my situation I opted for an 8″ x 24″ floating shelf picked up at The Home Depot.  These shelves are inexpensive, very easy to install, and have an ultra clean look to them.  I mounted it fairly high so as not to have to bend and squint to identify the cars I was looking for.  I did not add track to the shelves so as to avoid having to deal with the hassle of aligning the trucks on the rail.  The cars just sit on the flat shelf surface.  I added a lip of 1 1/2″ molding to serve as a guard rail and that was it.  Even this small shelf holds twelve, fifty foot cars.  At most, I’ll only need one more shelf to hold what would typically get cycled onto the layout.  All other pieces are classified as for use in the distant future and are stored in boxes in my shop.  This floating shelf system makes cycling cars from the ‘bullpen’ a breeze and encourages me to avoid storing them on the layout. 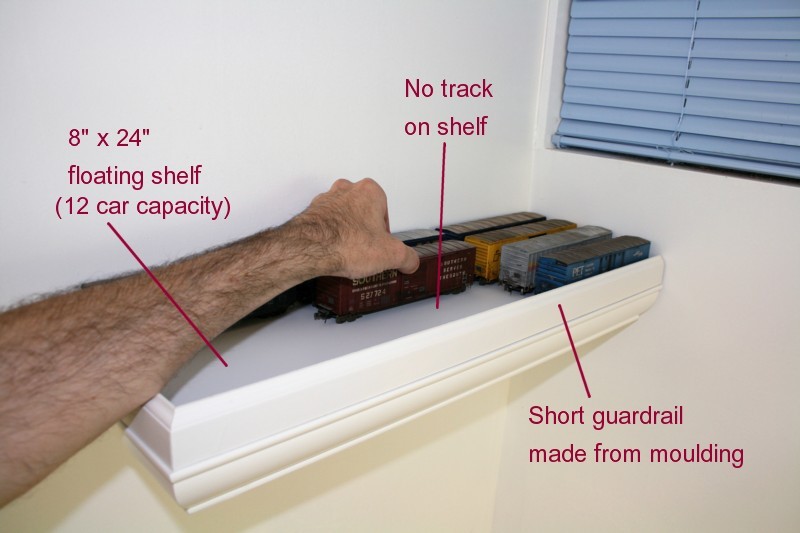 These cars are in ‘The Bullpen’ meaning they will likely see an operating session in the next few months.  Cycling them on and off the layout is a simple ‘grab-n-go’ which encourages me to keep them on this shelf and off the layout where they would clog things up.