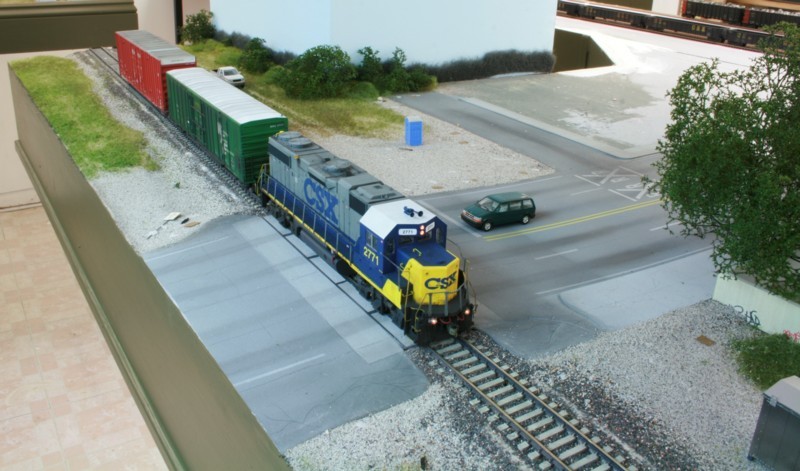 When prototype practices are fully incorporated,  even a simple two car shuttle can make for an interesting mini session.

Much has been written about model railroad operations.  Typical subjects addressed include rights of trains, timetable and train order operations, and car cards.  However, somewhere in all of this discussion of the technical aspects of the operations chess game we lose sight of the most important goal of all.  Specifically,  how do we capture the essence and atmosphere of what we are modeling?  How do we make it feel like we are actually there and watching the real thing?  As with music, each operational type, whether it be mainline through trains, locals, or passenger trains, has it’s own distinctive beat.

Industrial switching operation is characterized by a slow, purposeful, rhythmic cadence.  Locomotive crawl at a few miles an hour as they pull cars from the deck and deal them with precision to the customer’s door.  The atmosphere is one of mass, momentum, and the sound of 2000 horsepower prime movers constantly throttling up and then cycling down…over and over and over.  There is the sound/motion disconnect of momentum as we hear the power rev up and exhaust billowing skyward long before we see actual movement.  There is the constant sound of idling diesel cylinders and air release as the engineer waits patiently while the brakeman walks, hooks up hoses, uncouples, and walks some more.  It…is….slow.

In the real world there is no way to speed it up even if you wanted to.  Model railroad operating sessions are a different story.  To watch a typical ops. session you’d think it was a trip to the dentist, to be dispatched and completed as quickly as humanly possible rather than drawn out and savored for the flavorful experience that it is.

One would think our model brakeman have the wings of Mercury as the engine screeches to a halt at a switch, the switch is instantly thrown, and then the loco. launches like a top fuel dragster down the spur.  The process is repeated at the same lightning speed throughout with total ‘mission’ focus.  In short order the layout owner rejoices in the fact that the job is ‘done’.  Wait a minute that didn’t keep him too busy.  The layout must be too small…..  No it’s not too small it’s just that nothing was done the way it really happens on an actual railroad.

So, how do we translate that to our switching layout?  First there has to be a desire to do so.  There also has to be  knowledge and awareness of how things really happen in the field.  Most grasp the concept of running the locomotive a little bit slower.  That’s only a small part of it though.  Everything should happen slower.  Let’s take a look at some things that will enhance the industrial operations experience.  All you will need is a good sound equipped locomotive, a hot cup of coffee, and the willingness to throttle one area of your life back into slow motion.

An EMD GP38-2 weighs 125 tons, considerably more than your SUV.  Even with 2,000 horsepower, it takes awhile to get rolling and it takes a while to stop.  It’s not like a Porsche Boxster where you hit the throttle and go.  By contrast a Lifelike GP38-2 weighs ounces.  It takes some fiddling to get it to move and react like the real thing.  As we operate our model engines it’s helpful to keep in mind just how much 125 tons really is!

Typical model motors have a huge amount of top speed that is completely and utterly useless to us.  For our part we really only need the 0 to 30 mph end of the scale.  The 30 to 250mph isn’t of much value is it?  We’d like to have a fair amount of turn on the throttle knob in that 0 to 30mph range.

Every model has different operational characteristics so use the following settings for general guidance only.  They may be a bit much for other units.   In my case I’m using a Soundtraxx Tsunami decoder in a Proto 2000 GP38-2.  I start first with momentum and deceleration.  For this specific model I set the momentum very high to a value of 160 (out of a max of 255).   As high as that number seems in some cases, for this application it doesn’t feel like overkill (in other locos it would be way too high). Although it would be realistic to set the deceleration to an equally high value, I really don’t like to do so.  I want total control of the stop function so set deceleration to a relatively low value of 30.

A very handy, simple, and often overlooked feature of many decoders and DCC systems are custom speed curves.  In basic terms a speed curve allows you to easily input a setting that totally alters the top speed of the locomotive as well as the intermediate speed points in between 0 and top end.    In most cases a few keys strokes inputs the curve and you have what feels like an entirely different locomotive.  My DCC system (EasyDCC) uses linear curves (other types are logarithmic and exponential).  I selected curve 6 which gives a top speed of 60% of normal.   I use 28 speed steps instead of 128.  With a little practice and a light touch on the throttle the momentum, speed curve, and 28 steps combine to create a situation where you hear the prime mover rev up for a few moments before the engine starts to move.  (With 128 steps I would get movement as soon as I so much as breathed on the throttle).

Throttle use really does require a mindset of a light touch and relaxed patience.  Spinning the knob like a ship’s wheel and catapulting your locomotive, drag racer style, at every move isn’t very “railroady”.  Get in the habit of just cracking the throttle and ‘waiting’ for movement rather than spinning it and ‘forcing’ movement (which usually requires frantic back spinning of the throttle to compensate for your impatience).

In most switching environments it’s unusual to see speeds in excess of 25mph.  Usually they are much less than that.  This should be in our mind at all times.  Anything over that speed is just not very realistic.  The pay off is that slow speeds effectively ‘stretch’ smaller layouts (well actually they would stretch a big layout too).

Pauses in the Action

Most grasp the idea of cruising down the branch at a relatively slow speed but then quickly pick it up a notch when it comes to car move,rments. Slow applies to everything, speed AND movements.

I mentioned ‘mission mode’ earlier.  Model railroaders really do have a bad case of it.  They focus on getting the job done and getting it done ASAP.  If that’s your cup of tea go for it.  Get that nasty op. session over with so you can go mow the lawn!

In the real world though there are a lot of pauses in the action.  In most cases it’s because real brakeman, as much as they’d like to, just can’t fly.  They have to walk.  They have to get out of the cab, walk to the switch and throw it.  They need to walk to the car and uncouple it.  They need to walk to the industry gate and unlock it.  They need to walk back to the locomotive.  They get extremely ticked if the train takes off and leaves them without waiting for them to walk back.  All this means that there is a substantial amount of time where the engine is just idling waiting for tasks on the ground to be completed.   On a model railroad you know where the line is between relaxation and boredom.  What’s the rush though?  Take a pause between moves.  Stop your engine, go warm up your coffee and come back.

Out of ignorance modelers skip a lot of real tasks that, if incorporated would add interest and extend an operating session.  For example, in some environments crossing gate protection alone doesn’t instill a total sense of confidence in the engineer.   Even you are in the right, peeling a Camry off of the pilot will result in a lot of paperwork back at the office.  For this reason it’s common at some intersections for the engineer to bring the loco. to a complete stop at the crossing, lay on the horn, and then inch across.  The use of fusees to protect grade crossing movements is becoming more prevalent.  Model versions of the fusees are easy to install and add an interesting dimension to operating sessions as you halt the action and activate the warning device.  These are just two examples of practices that can be added that add interest without feeling too contrived.

To give you a sense for how this can all play out on a model railroad I ran a solo op. session on the Downtown Spur this morning.  It is common on the prototype to have a case where the graveyard shift can’t get all of the work done.  The morning shift will then handle any leftover mop up duties on the spur.  I set up a similar morning shift clean up session that, on the surface seemed incredibly simple.  One car was to be spotted at Florida Bottling and an empty at Trujillo was to be swapped out for a load.  Drop two cars, pick up one.  No tricks.  No gimmicks.   The length of the session?   A full 50 minutes!

You would be amazed at how much incorporating momentum, slower speeds, pauses, and real world tasks will enhance and extend the operating experience.   And that’s what we really want isn’t it,  a better experience that lasts longer.  We want the sensation of actually being there.