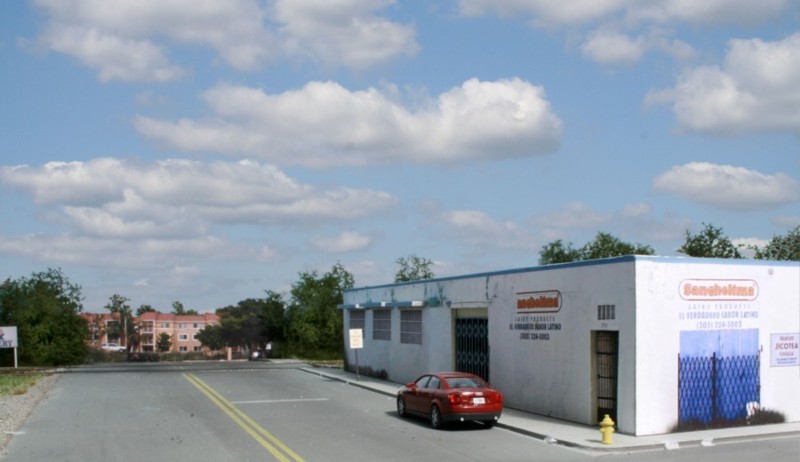 A big part of model railroading is creating images that we enjoy looking at.  Although totally lacking in drama, this shot of the Sanchelima Dairy is one of my favorites of the layout.

A visitor to my website brought up an interesting point yesterday.  It’s an issue that I’ve been subconsciously aware of.  Given its importance, I can’t believe I haven’t given it more thought.   This fellow dropped me a note stating that if I’d followed through on an earlier track plan idea I would have been able to develop a very stunning scene featuring the Miami River.  Better yet, the scene would be right by the door making it the first thing a visitor would see.  I do remember making the design decision not to use that version of the track plan but it took me awhile to figure out why not having that scene didn’t bother me.

This issue arose a few months ago when enough of the Downtown Spur layout had taken shape that I could get a sense for how it would look.  I clearly remember, thinking, “this really isn’t very impressive”.  I didn’t mean it in a negative way.  Perhaps a more accurate way of summing up my thought was, “this really isn’t very dramatic.”  I also remember not caring and casting aside this important issue without any more thought.

A month later when some experience modelers came over for a layout visit I tossed out an innocuous comment to see how they’d react.  I think I said something like, “The layout isn’t that visually impressive is it?”  They looked at me as if to wonder why I’d ask such an irrelevant question,  shrugged their shoulders, and continued to examine the layout.

Should a model railroad contain at least one dramatic scene?  In other words, is an eye catching visual a necessary design criteria for a successful model railroad?

It’s really a thought provoking issue.  After thinking on it for a day, I’m a little surprised how I feel about it.  I certainly enjoy looking at a well executed dramatic scene on a model railroad, particularly if it’s not contrived.   Having said that, I really don’t care if a model railroad has such a visual centerpiece or not.    It took me awhile to figure out why.

When we look at a model railroad we want to see pleasing images.   Where I was getting hung up was the association between dramatic images and pleasing images.  You can have one without the other.   For example, we enjoy looking at a well composed dramatic photo of the Grand Canyon.  However,   we would equally enjoy a shot of a quiet pond.   Drama is just one arrow in our quiver.    I’m totally satisfied with the Downtown Spur because, to my eye, I enjoy looking at it.  It does what I wanted it to do. It transports me to a place a find interesting.

You can build masterfully created dramatic scenes into your model railroad and have something that you really enjoy looking at.  That is the more common approach in our hobby.    I realize now that such an approach is not a requirement for visual or emotional appeal.   You can have something just as satisfying visually without it being dramatic.