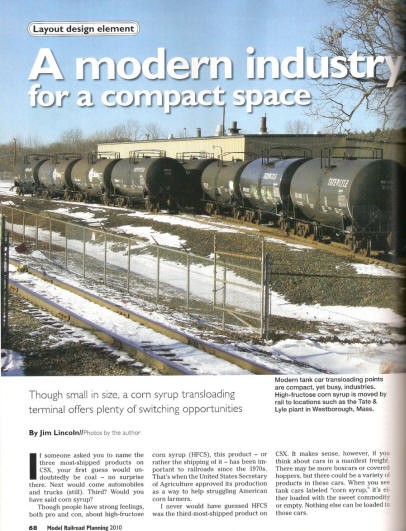 In MRP 2010, Jim Lincoln gives an excellent example of having your cake and eating it to.  That is, having fascinating operations without needing  much track to do so.

During the design phase, model railroaders are often terrified that their layout will be boring, that it won’t have enough elements to keep their interest.   After all, who wants to invest all of that time and effort into their passion only to end up with something that isn’t satisfying?   We overcompensate for this fear by squeezing more and more track onto the plan until it is at the bursting point.  We look at it and squeeze in still more  just to be safe.  The end result, to be blunt, is often a mess – a layout with more industries and scenes than the square footage can support visually.   The root cause of this layout design death spiral is simple.  It is a lack of information.  If we as modelers can teach ourselves how railroads and industries really work, we quickly find that it takes far fewer elements, and much less track, to hold our interest.  We can let out our breath, relax, reduce the amount of track on our layouts, and  enjoy a model railroad that is both interesting to operate and also has enough open space to have visual balance.

A little digging transforms industries we initially thought to be boring into scenes that are much, much more interesting than we initially thought. If that rather blah one spur industry all of sudden becomes a complex operation then we need much fewer of them.

This point is brought home in an exceptionally well written article by Jim Lincoln in Model Railroad Planning 2010.  In his article, Jim breaks down the operations for a small corn syrup facility.  If you look at the photo above you see two tracks with what appears to be identical, boring, black tank cars.  Not so.  The cars are not the same.  Corn syrup comes in multiple grades and each offload pipe can only be used for the same grade of syrup or the product will be contaminated.  Now things get interesting.  We now realize the eight cars in the above photo are all different (different grades of syrup) and that they need to be spotted at a specific pipe for offloading.  If the cut of cars arrives and there are still a few tankers being unloaded then those cars have to be pulled, the new cars placed, and the old cars put back into place.

That small two track spur now becomes an hour long switch job on a model railroad.  The point is not corn syrup operations specifically but how having information on operations in general allows us to trim back the amount of track needed to make a model railroad interesting to operate.

A sophisticated design is not a complex or crowded one.  In fact, often the opposite is true.  A successful design creates a maximum amount of operational enjoyment with a minimum amount of track.