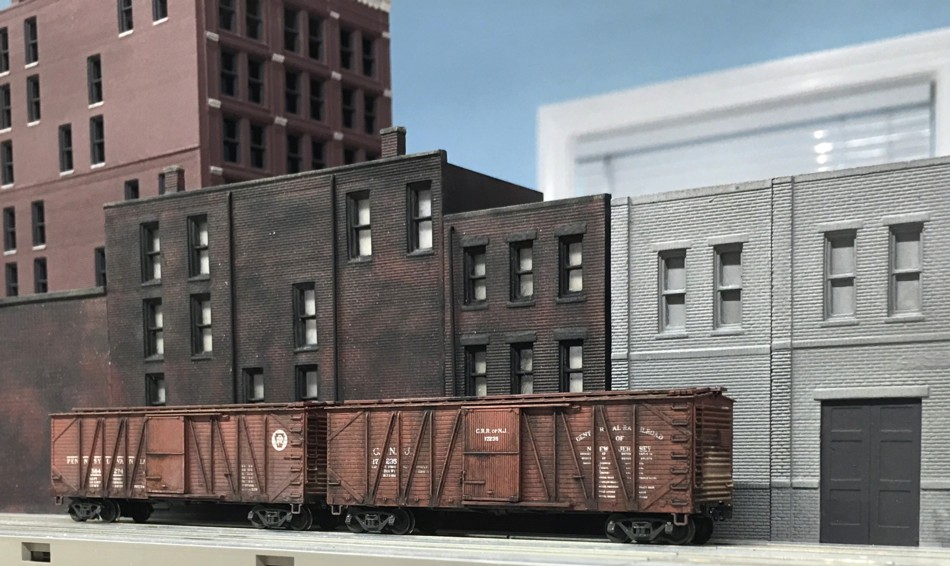 A tandem of Micro Trains boxcars sit temporarily in the street trackage of 1st Avenue.

We’d all like to have our cake and eat it too but, unfortunately, life rarely pans out that way.  An N scaler has the enormous advantage of being able to have a rather significant railroad virtually in their hip pocket.  The small size also opens up the ability to have much more realistic scene composition by virtue of having the space to spread things out as they appear in the real world.

For all its positives, however, the scale poses significant challenges, especially for the realism orient modeler. When it comes to rolling stock those challenges are:

-Cast on details analogous to the HO scalers old “Bluebox” days or….

Whew!  Did I miss anything or are you back to HO already!  The situation isn’t hopeless though.  The rivet and seam detail tends to be very finely cast to scale which is no small thing.  Also, the pad printing is typically well done.  So all is not lost.  However, if you hope to achieve any semblance of a plausible end result, and do so without spending weeks on each car, it’s important to come up with a strategy.

The starting point of attaining visual realism is the realization and acceptance of how much color treatment and weathering has on overall appearance, far more so than prototypical accuracy.  Once that realization is embraced, you can direct your efforts in that direction.  Since the overall casting detail is generally excellent, the use of dark washes will “pop” that positive attribute out.  Off the shelf, all rolling stock of any scale, has very vivid lettering.  For WW2 era that is usually white.  This brilliant white needs to be toned down but very subtly.  The cars above were first given a thin wash of burnt umber and black artist oils.  When that dried, I used an airbrush to fog on an ultra thin mix of Dullcote dulled with a drop or two of Model Master Army Helo Drab.  Dark brown and black chalk was then rubbed along the outside bracing. Surprisingly, with this color treatment the cast on details are less objectionable than cars that come with oversize stand off details.  In summary, apply a thin brush wash of dark artist oils followed by an airbrush hazing of US Helo Drab to knock down the brilliance of the white.

Moving on to ride height….stock wheels and couplers are immediately stripped of and consigned to the trash.  BLMA makes an exceptional N scale truck comprised of thin, small flange, metal wheels.  What’s particularly interesting is the bolster has an ingenious downward offset that lowers the car’s ride height.  Atlas has picked up the ball and integrated this product into their production line (I generally use BLMA #9045).  Putting these wheels in place and body mounting the couplers generally puts everything (car and couplers) where it needs to be vertically.

The final issue is the couplers.  Gosh, you HO scalers have it so nice.  This is a “down the road” issue I’ll need to experiment with and sort out in the weeks ahead.   For now I’m using body mounted Z scale couplers simply to have something there that isn’t so huge.  However, the Z scale couplers don’t really have a prototypical appearance and give cars in motion that maddening yo-yo/slinky effect.  I may be able to mitigate that a little by adding friction to the wheel bearings.    The new Micro Trains scale couplers look nice, don’t yo-yo, but have a massive coupler pocket that creates clearance problems in their own right.  If I can come up with some form of modified pocket that may be the best bet.  Stay tuned…..