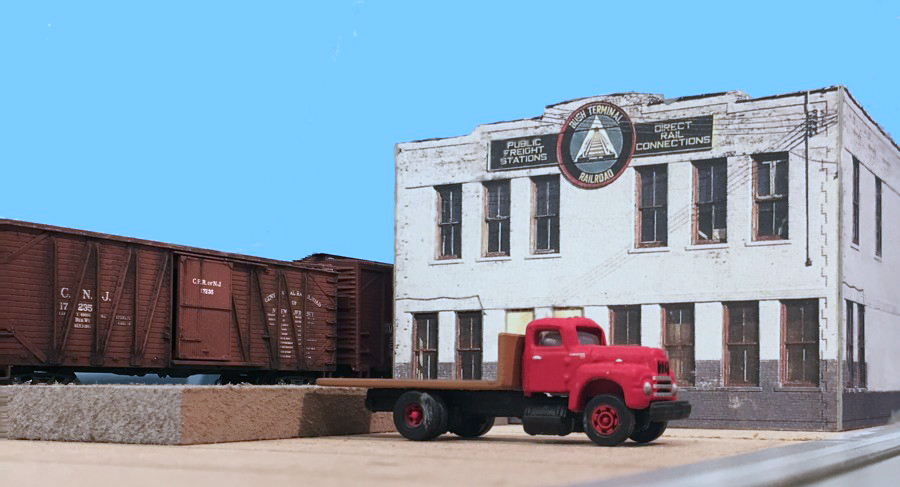 This mock up of the Bush Terminal Freight house was a test to see if the photo wallpaper technique would scale down to N scale. It appears it will. In this attempt, my main goal was to test the print resolution which does check out. I’ll now rebuild the model adding more layers, depth, and stand off details.

Entering into the Brooklyn Terminal project I had a lot of questions I needed to work through in my mind to see if I had a fighting chance of building something that at least approached what I’d done with my HO layouts.  It wasn’t enough to be able to address the questions and challenges (at least what I personally viewed as challenges) but to do so in a way that didn’t involve excessive amounts of time.  I really wanted to have a realistic grasp on what the issues were and how hard they’d be work through.  At this point I do think I have a sense of what I’m dealing with and it appears the big questions and concerns I had are things that can be dealt with in a fairly straight forward manner.

Photo Wallpaper: Could this technique be scaled down to N scale? The main question I had was print resolution.  How would the photo laminates look when blown up in a photo?  As you can see from the shot above, it appears the resolution will be fine.

Photography:  I enjoy experiencing my models through photographs.  Would I be able to create N scale models that would stand up to the up close and personal photography I enjoy?  It appears so.  With careful weathering, the cast on details on rolling stock aren’t as noticeable as I had feared.

Code 40 turnouts:  Track tests a few weeks showed that the Model Power Mogul can handle code 40 track, as long as there aren’t spikes in the way.  Easy enough to fix that but what about the turnouts?  How to throw them?  It seems so basic in retrospect…Tortoise Switch Machines.  As I was mulling over the issue I recalled a post on one of the forums where a modeler had devised an ingenious method of modifying the throw wire for code 40.  He used the standard .037″ wire but at the end, at the point the wire would touch the throw bar, he soldered on a short, half inch extension of much thinner wire.  This approache gives you the stiffness you need to throw the points and a small enough wire at the top to allow the use of narrower throw bars.

Couplers: For now I’m going to stay with Z scale but I’ve been contacted by a modeler that has had some success modifying the Micro Trains scale couplers to make them more viable.  It sounds promising.

Keep Alive:  To be fair, the Model Power Mogul rarely stalls (even on complex track), but it does occasionally.  If I could find a way to get even a small capacitor tapped into the decoder it would be a game changer.  Litchfield Station has offered to dig into this if I’ll send them a unit to look at.  It’s not the kind of thing they can address unless they have the model in front of them with the shell off. I have to believe that at some time in the next year or two we’ll have the capability to add this feature in tight N scale quarters.