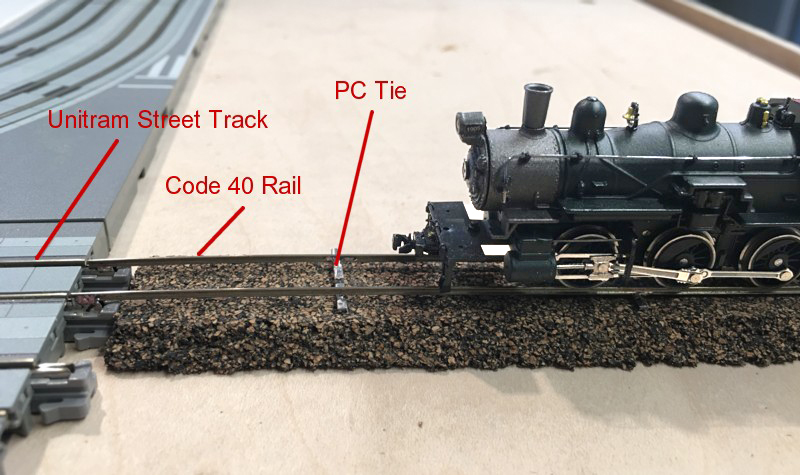 The oversize appearance of N scale rail is an issue visually, particularly in photographs.  Actually, the oversize nature of many N scale components is a visual issue but for today let’s focus on the rail.

With track appearance you are dealing with two components that really stand out if they are oversize, the rail web itself, and the spikes.  Of the two, the spikes are the biggest offenders.  For the Brooklyn Terminal project I’m fortunate in that one of the advantages of street track is that the rail web and spikes are embedded in the pavement.  All you can see is the top of the track.  Problem solved for those areas.

Model Power’s recently released Mogul has proven to be a total blessing in terms of running quality.  The question now becomes, how far can I push things with it in terms of  going to smaller rail?  The driver flanges are oversize but not grossly so.  The size of the flanges isn’t that apparent.  The tender wheels are huge but, unlike the drivers, they can be easily replaced.  How will it react when placed on code 40 track?

I took the loco and pushed it down a section of Micro Engineering code 40 flex track.  As expected, I could feel the flanges riding up on the spike heads.  What if I removed the spike heads?  I took some code 40 track, removed the plastic ties and spikes, and replaced them with PC ties, and hooked up the power.   Success!  The steamer would easily glide back and forth without so much as a hiccup.  Problem solved for the exposed/non-street track, just use PC ties.

The remaining issue will be the turnouts.  Hand making N scale code 40 turnouts on PC ties is pretty easy once you get the hang of it.  The issue is, how do you throw them?  They are super delicate and there isn’t much material around the throw rod.  I don’t want to go with Tortoise switch machines nor do I want to deal with manual linkages as that would break up the clean look of the fascia.  For switching layouts I prefer manually/finger flipping the points.  Both Micro Engineering and Peco have that spring loaded feature built in.  How to incorporate that in code 40?  One thought is how would a Micro Engineering code 55 turnout would look if I trimmed off the spikes and could somehow slim down the look of the guard rails and frog?  To be determined…………