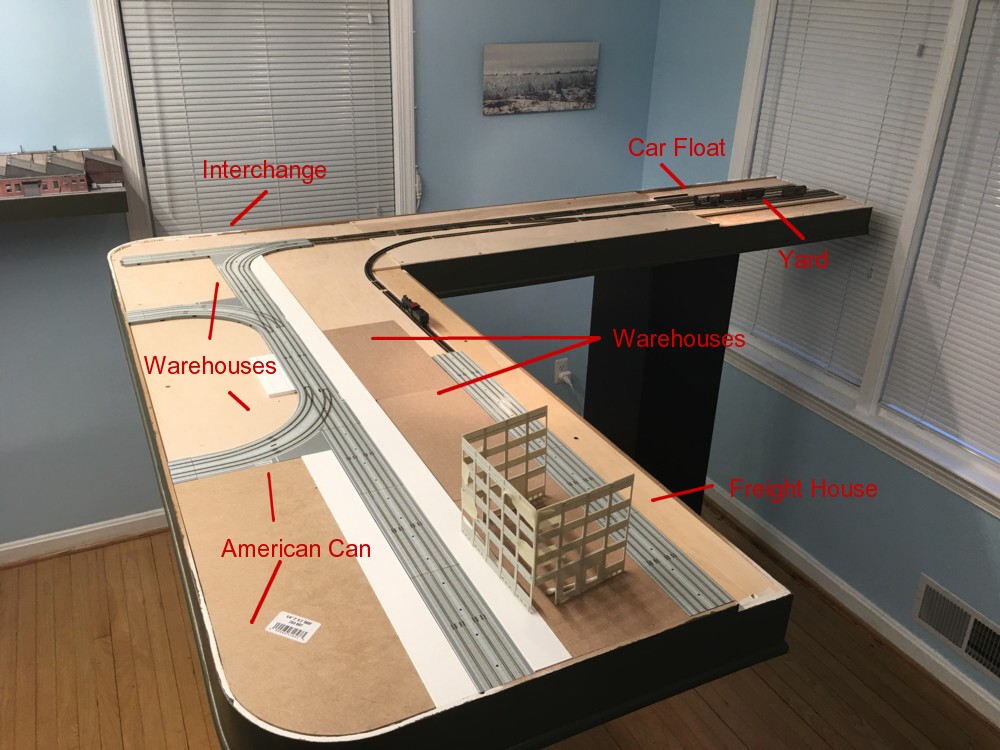 N scale.  N scale steam.  Short wheelbase N scale steam.  Tight radius street trackage.  What could go wrong!?  Actually things on the Brooklyn Terminal are going fairly well.  However, if I’ve learned one thing in my forty plus years of modeling it’s this.  It is really, really important, to get something running as soon as possible, maintain momentum, not get bogged down sorting out mechanical problems before you do in fact start running, and finally, knowing that with certain themes there WILL, without question, be mechanical challenges.  Anticipate those challenges.

For this reason I employ a construction strategy of assembling the bench work and then immediately lay what I’ll call operationally mocked up track work.  This would be Atlas code 83 in HO and Peco code 80 in N.  Working neatly but quickly, I’ll get the temporary track down, wire it in, and start running.  This does two things.  First it keeps enthusiasm high.  Second, it allows you to test your plan and concept before investing huge amounts of time building detailed track work.  You don’t want to spend three months laying a grand total of three feet of Proto:87 scale rail, right down to etched tie plates, only to find the original plan was flawed or needs adjustment.  Or, using the same example…let’s say the design is fine and consists of a hundred feet of rail.  If getting that first three feet of it down takes you three months (and it very will might) you’ll get bogged down and eventually lose interest.  I call it the old tractor pulling analogy.  Initial enthusiasm shoots you out of the gate but eventually the scale of what you’re trying to do pulls you to stop.  I’m speaking from experience.  If you take that same example, mock up your track, then you can enjoy the layout and gradually upgrade the rail at your leisure.

There has been a fair amount of testing and adjusting on the Brooklyn Terminal but so far things are encouraging. I now have the mock up track in place as well as most of the Unitram street pieces in.   With some light filing here and there the Kato Unitram is looking more and more viable as a way to attractively model street track…..as long as you commit to short, and I mean really, really short wheel base locomotives.  The new Model Power 2-6-0 is also looking more and more like a breakthrough locomotive from the standpoint that we now have a small steam switcher in N scale that is an exceptionally smooth slow speed runner.  I can now run test op. sessions, see what I have, and then move on to more detailed work.