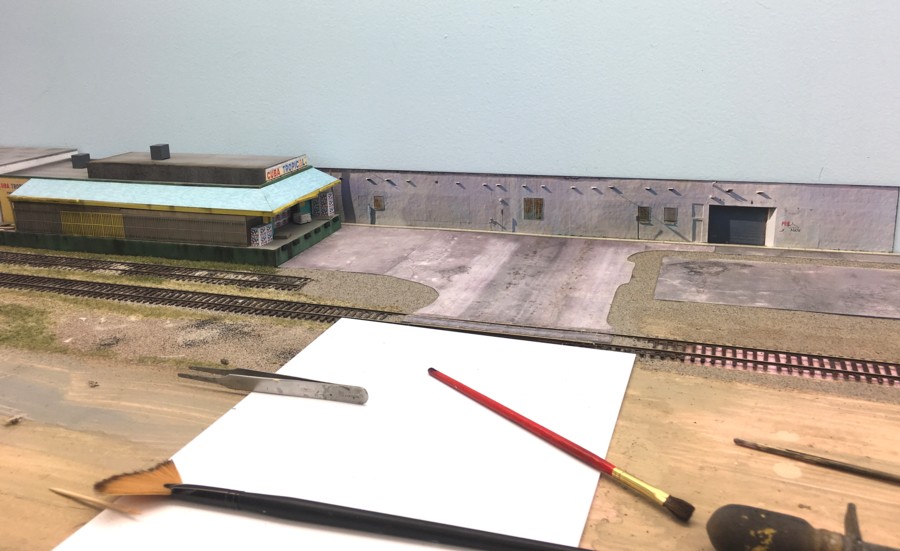 Urban scenery is much more time consuming to construct than its counterpart in mother nature.  Streets, sidewalks, lots, and utility poles generally are more time consuming to construct than the actual structures.  Shown above is the intersection of 13th Avenue and 23rd Street.  The recently completed Cuba Tropical Produce structure has been “planted” on the left.  The grade crossing was made using CustomTraxx street rail with photo laminated pavement between the rails.

I’ve never been totally satisfied with the street transitions from 3D layout to 2D backdrop.  To get around that, I’ve resorted more and more to “T” intersections.  Not as common as a through intersection, they aren’t an oddity either.  In the scene above 13th Ave. tees into 23rd Street which is represented by a narrow, one inch wide roadway running right to left in front of the building flat.  The structure is photo laminated building flat glued to styrene for a hint of depth.  I built it about a third under-size for forced perspective.  You can see a thin sidewalk in front of it.  Note that with building flats I: a) keep the height low and b) hide the edges where it meets the backdrop.

The paved pad to the right will be a pipe storage yard for Bond Plumbing.

It’s hard to believe it took two weekends to get just this much done and it’s likely it will take at least another three more weeks to wrap it up.