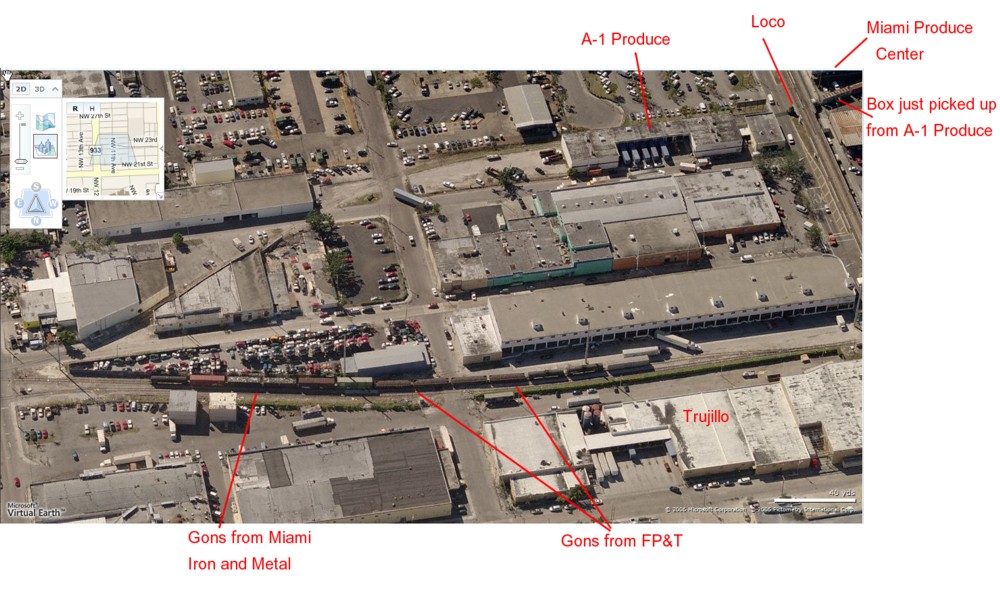 When I first started researching the Downtown Spur, I made a point of capturing as many of the Bing Birdseye images as I could.  I’m glad I did because, as far as I know, Bing doesn’t archive their photos and they are now gone forever.  I thought it would be fun to go back and wax nostalgic at how diverse the industries on the Spur once were.  My best guess is the shot above was taken around 2005.  The loco has dropped it’s train on the runaround track and gone down the switch back.  It picked up a car at A-1, pushed it across 12th Avenue, and is in the process of picking up another car at The Miami Produce Center.  The two pick ups were put on the train bringing it’s total 15 cars at which point it headed back to Hialeah Yard.  Better lucky than smart.  When these images were taken they captured this entire switching sequence from above photographically.

The Downtown Spur is roughly three and half miles long.  I made my first photo safari to it in 2006.  In terms of “interesting activity” it seemed to peak in 2007.  In late 2007 the 12th Avenue Street crossing was removed.  Since then Trujillo has move to a new location along the FEC and the entire switchback has been removed.  The eastern portion of the lead from Family and Sons to 7th Avenue is now pretty dead.  The west end from Family and Son to FP&T appears to be as busy or even busier than ever.