Frustrated by the fact that, despite years and years of resolutions, you’ve yet to lay so much as one turnout on an actual model railroad?  Started a layout but demoralized by the woeful lack of progress?  You have a lot of company so, welcome to the club!  Feel better?  Didn’t think so.

The first step in resolving a problem is uncovering its root cause.  Far, far easier said than done. In an effort to uncover why, despite our best efforts, we aren’t getting anything accomplished  a distinction has to be made between what is a distraction, a behavior, excuse making, and a legitimate reason.  It’s human nature to subconsciously placate ourselves and chalk it all up to the latter  (i.e. a legitimate reason).  Deep down we know that isn’t the case.

Last week, while standing in line at FedEx/Kinkos, I noticed a book on the rack  entitled Manage Your Day to Day by Jocelyn Glei.  Short, a very easy read, exceptionally insightful and with direct application to the inertia problems model railroaders often face. 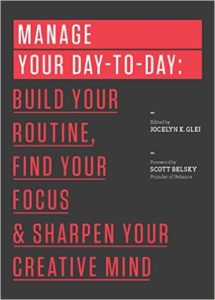 Just a few pages in I saw many of my own self-destructive actions that prevent me from accomplishing more.  In trying to isolate your own personal logjam, try to identify where your specific breakdown is occurring.

Behavior.  In Glei’s book, she identifies something that applies to my own situation.  She calls it a “clear the decks”  mindset.  You don’t feel you can concentrate on a modeling project until you clear the decks of all the inconsequential bs you think you need to get done first.  For example, I’ll airbrush that loco AFTER I, fill in the blank, clean the house, mow the lawn, balance my checkbook, and on and on.  The problem is you get the decks clear and then you have no time left.  The solution is to do the modeling first, the lawn will still be there when you get done….of that I’m fairly sure.

Distractions.  I found this to be the most fascinating section of the book and it covers a good third of the pages.  One guess as to the number one cause?  You got it, SCREEN TIME.  Facebook, emails, forums, mindless web surfing.  I loved the dig deep research likening the dopamine payoff we get from opening emails and comparing it to the identical chemical foundation that occurs with lab rats and cheese!   The net has transformed our hobby.  Unfortunately, my guess is that is the leading source of the decline in model railroad productivity.  None of us is immune and until we acknowledge the addictive grip those screens have upon us, I’m afraid our lack of progress will be permanent.   There are things we can do such as removing forum bookmarks, turning off facebook feeds, and simply not turning our computer on during modeling days.

Legitimate reasons.  I’m in Afganistan and being shot at.  My house was leveled by a Cat 3 hurricane.  I have serious health problems.   I have a ninety-minute commute, each way, and am exhausted by the time I get home.

So, looking at three of the four above items, seventy-five per cent  are outside the realm of a legitimate reason and can be worked around.   If, through some honest soul searching, we can uncover the true source of our lack of production, we are well on our way to taking steps to finally create something in miniature.

The good news is that you don’t have to free up THAT much time to make an enormous difference.  Just ninety minutes of intense, sustained concentration, if applied consistently week to week, can result in a tremendous amount of production.   So let’s be real, what is more satisfying, placing that craftsman structure on your layout or Earl’s Facebook post of the photo of a cheeseburger he’s about the eat at the local pub (and then the thirty comments that follow!)