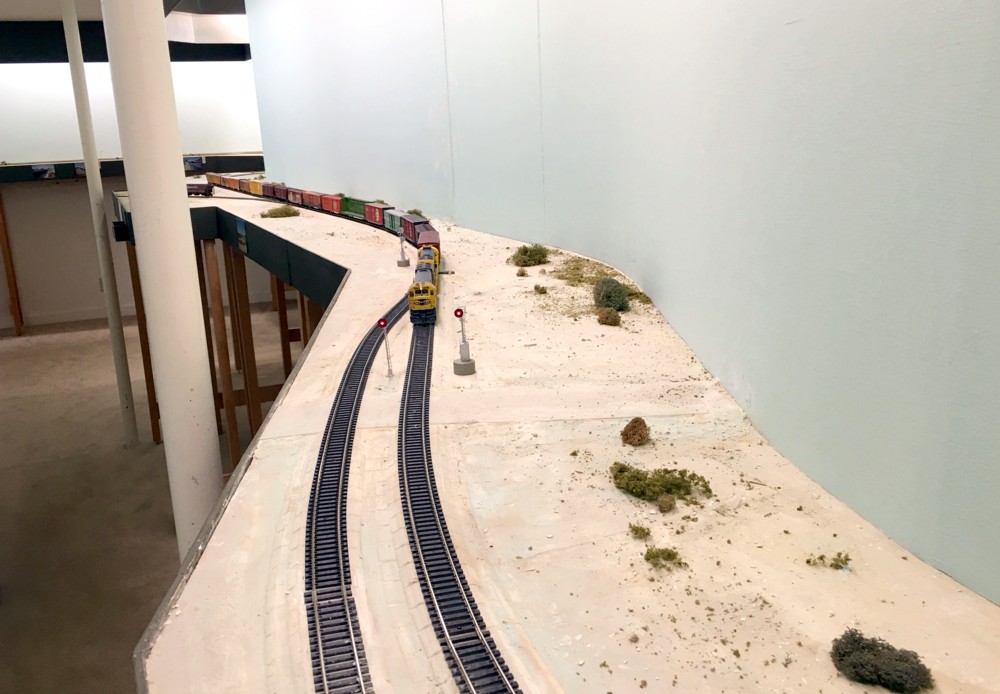 Cruising through the desert on David Barrow’s layout.

I feel like I should track down all of the attendees of my early op. sessions and issue a formal apology for what I put them through.   It’s a common mistake layout owners make when they get into the operations game and have their first several years of sessions.  We feel obligated to make sure our guests are entertained and also want to show them all aspects of the layout.  By “all” I mean EVERY industry, every aspect.

This leads to what I call “job stuffing”.  Job stuffing is overloading an assignment with way, way more tasks than any mortal can handle and still have a good time.  Switch lists with dozens of pick ups and set outs, “puzzles” so the operator has “fun”, way too many trains on the schedule.  Cars aren’t blocked.  Pickups are buried behind other cars.  Schedules are too tight.  Working EVERY industry.  The session takes on the appearance of Hartsfield International at rush hour.  My guests were polite but, having been on the receiving end of this scenario on more than one occasion, they probably didn’t have that much fun, or at least as much as they could have.

What I, and many other layout owners, failed to grasp is what it’s like to be thrown into an unfamiliar environment.  We know the geography of our layouts like the back of our hand but a newcomer will be disoriented even with the best of labeling and signage.  I also failed to grasp how important the recreational and social aspects of an op. session are to most folks.

I just got back from a thoroughly enjoyable ops. weekend in Austin where I operated on David Barrow’s, Tommy Holt’s, and Riley Triggs layouts.   I was really struck by how they designed their sessions and how much fun I had.  What do they do differently?

Set up correctly, operating sessions can be a blast and still be absolutely prototypical.  Thanks guys!