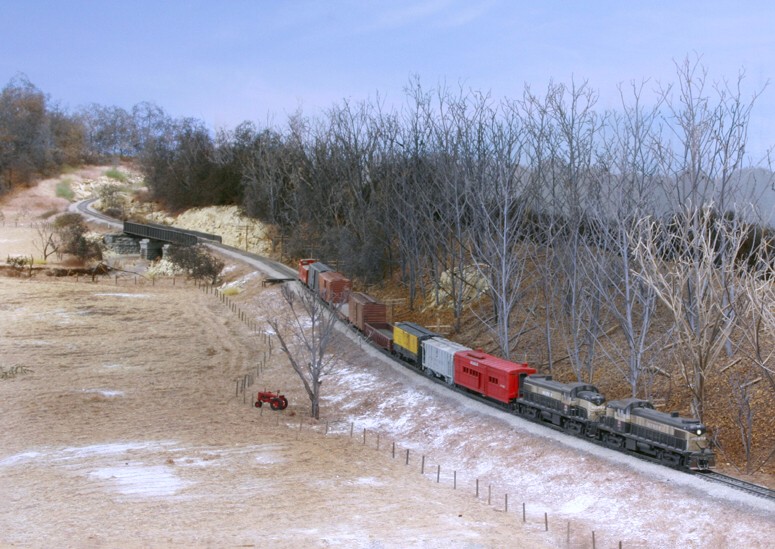 A southbound local passes bridge E8, south of Bloomington, IN on my old N scale layout.  I devoted a full thirteen feet to this ‘boring’ scene.   There were no industries, no turnouts, nothing but the field and stream modeled as they actually appeared.

Of all of the factors that contribute to realism, at the top of the list is scene composition, the size, shape, location and distance between elements we put on our layouts.  It also refers to which elements we chose to place in a scene.  Have you ever been riveted by a cleanly executed architectural model?  Even if the model is all white or gray, you are drawn in because it is perfectly composed.   Such models drive home the impact of getting it right.  If you don’t get it right, it can be hard to compensate regardless of how well you perform the rest of your efforts. 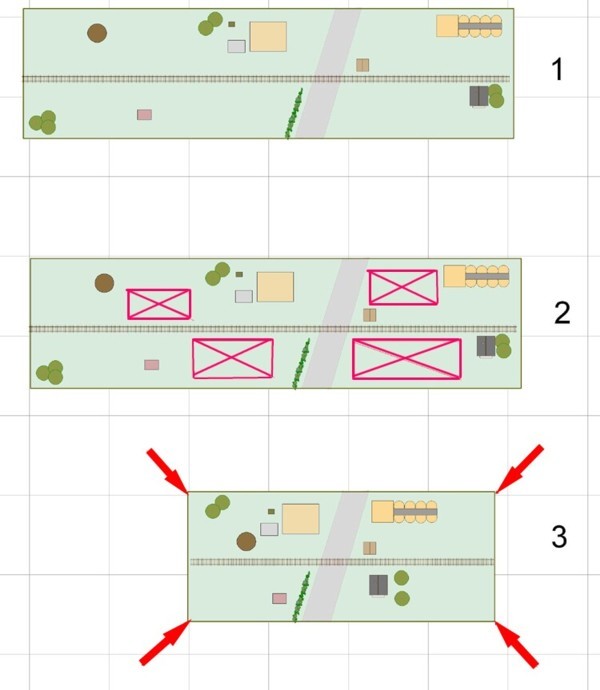 At the top of the list is the spacing we place between elements.   This is where modelers typically put themselves behind the eight ball right out of the box.  Given our limited space, obviously there will have to be some compression.  However, if you take compression too far and place your elements too close together, your scene suffers.  Such overly compressed scenes are probably the single largest error model railroaders make.   There are so many interesting things to include on our layouts it’s only natural to try to include as many as possible.  It takes self-discipline and a leap of faith but, if you can accept the fact that you can’t have it all, incorporate fewer elements, and space them further apart you’ll be amply rewarded.   A few things done well are much more powerful than a lot of things done not so well.

Pictured above is a typical agricultural scene found throughout the country.  Diagram 1 shows the scene drawn to scale.  Note the ample space between elements.  Given our real world of limited modeling room, the natural tendency is to eliminate the open spaces between elements (diagram 2).  The typical model railroad mindset is to preserve and incorporate all elements at any visual cost necessary.  Unfortunately these open spaces are what defined the scene and we’ve just eliminated them.  With the open spaces eliminated, the modeler then compresses everything into the space available.  The results is a typical, overly compressed, model railroad scene and not a “model of a railroad”. 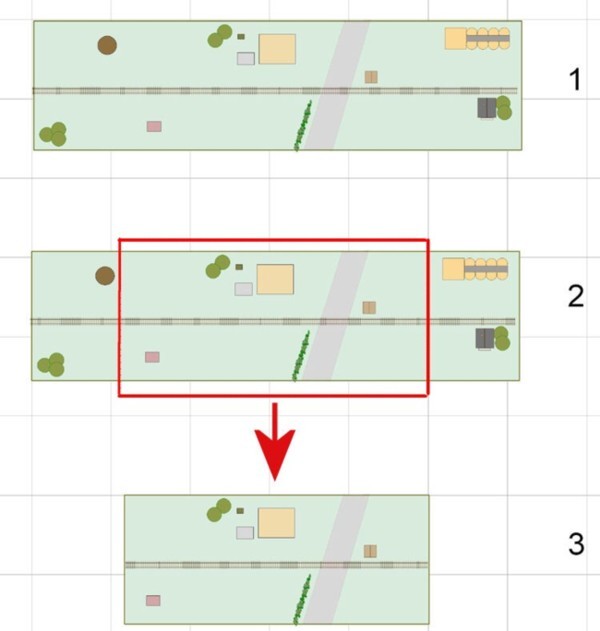 If in fact realism is the key, if you do indeed want to have the real world in your basement, difficult choices need to be made.  Cool stuff needs to be scratched from the docket.  Realism is achieved by cropping away items you don’t have room for and maintaining space between those that do remain.  Crop, don’t compress.  You can’t have it all, it’s just a fact of modeling life.   However, if you don’t try to ‘have it all’,  you’ll ultimately be richly rewarded with doing justice to the items you do decide to incorporate.

Another aspect of scene composition centers around the elements we chose to place in our scenes.  Are you a ‘cherry picker’ or a journalist?  Do you pick and chose which elements to include based upon how interesting you think they are or do you document what is actually there without judgment?   If realism is your goal, simply copying what is actually there is the ticket.  It’s also much easier.  The moment we start having a beauty contest is the moment the scene starts looking like a typical model railroad.  Model the mundane.  Model what’s there.  There is also a hidden payoff here.  In many cases, elements that at first glance you had written off as boring, upon closer examination turn out to be understated gems . 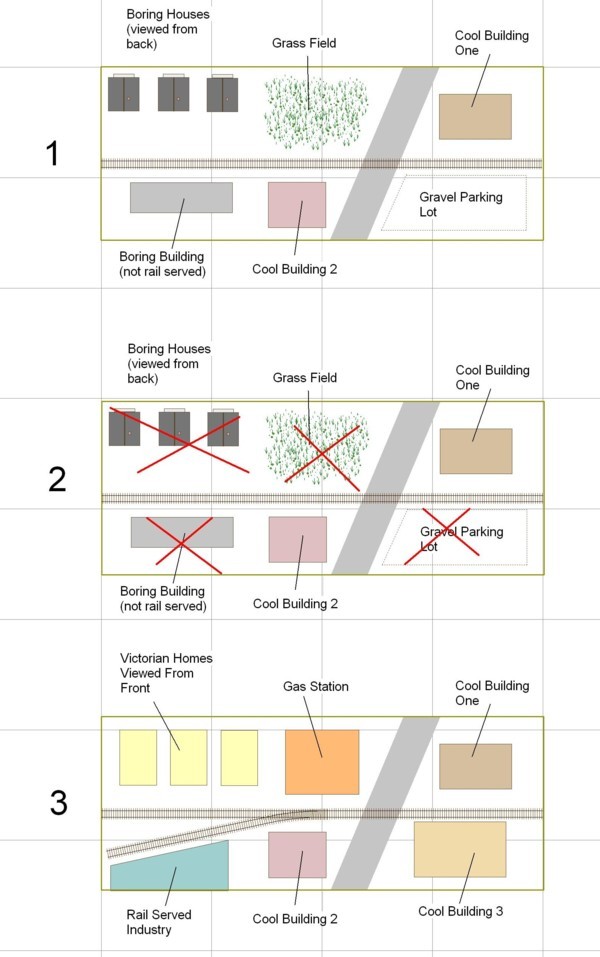 The diagram above illustrates a typical rail side scene.  Some buildings are interesting, some not so much.   A ragged field and empty lot are front and center.  The houses aren’t particularly dramatic, probably one or two story white clapboard with their backs facing the right of way.  There is a rail side structure that, horror of horrors, doesn’t receive rail service.  In other words it’s a typical scene.  The modeling path is extremely simple.  Just copy it, as it is, without judgment.  Unfortunately, doing so make many modelers break out in hives.  Anything that approaches the mundane is eliminated.  Empty space is considered wasted space (figure 2).  Boring elements and open space are eliminated. All industries must be served by rail.   The Walthers catalog is pulled out and every nook and cranny is filled with caricatures.  The end result again is a model railroad and not a “model of a railroad”.

Slow down, take a breath, take in your surroundings and train yourself to appreciate the ordinary, understated beauty that comprises the ACTUAL rail scene we love so much.