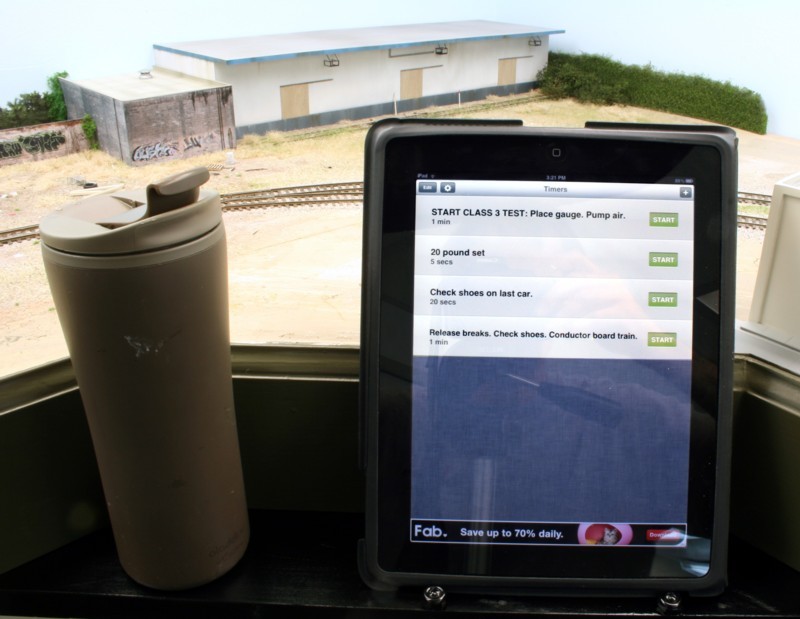 For some time I’ve been trying to come up with a way to simulate brake tests above and beyond just “waiting a bit”.  I wanted some form of interactive device that wasn’t too gimmicky.  Enter the iPad and a free app called Timer +.  Timer + allows you to input an infinite number of tasks and set the time to do them down to the second.  I talked to my friend, and professional railroader Barry K., for a refresher on the tests, the two most likely to be used in my setting being a Class 3 application and release test and the slightly more involved transfer train test.  The next decision was how to modify this for model railroad use.  Do I use the actual times for each task in the test or speed it up?  It comes down to individual preference but for now I decided to speed things up a bit.

The most common test is an application and release test, to be performed whenever a new car is cut into a train.   The conductor puts a gauge in the air hose of the last car and asks to the engineer to pump the train line air above 75 pounds.  When  the line is charged,  the conductor  radios the engineer and requests a 20lb reduction (set the brakes).  The conductor then checks the shoes on the last car of the train to make sure they’ve applied.  If so, he radios the engineer to release the brakes and the conductor verifies that the brakes on the last car have released.  This concludes a successful test at which point the conductor walks back to the cab of the loco.  Keep in mind that even with a short, ten car train, the basic act of walking back to the locomotive will take time.  You don’t just say “test done and fly on to the next industry”.

A transfer test is similar and would typically be performed in a situation where the train is at the end of a branch and the loco. runs around the train on the siding in preparation for heading back to the yard.  The test would be the same as a Class 3 test with the exception that EVERY brake on one side of the train is checked to make sure it has applied.  Instead of the small hand held gauge an EOT device (which among other things has a gauge on it) would be placed on the last car in preparation for the trip home which also adds time.  An actual transfer train test for a ten car train would likely take fifteen to twenty minutes, longer than I would probably chose to model.

I simply input these tasks in Timer + and somewhat arbitrarily set a time for them proportionate to the time they would take in the field.  For each task of the test I hit start and when the time runs out a buzzer goes off.  I then start the timer for the next task. 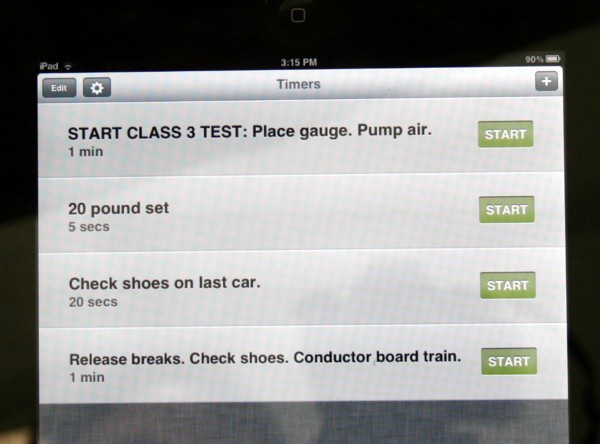